Maximize your efficiency by optimizing all stages leading to your targeted conversion. 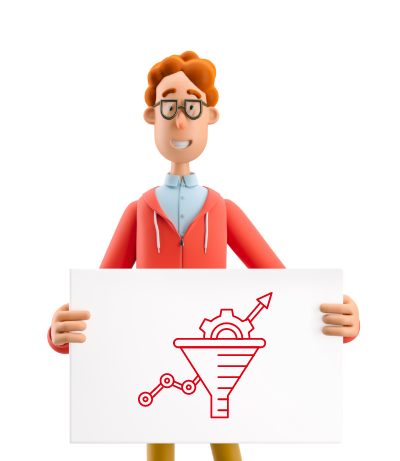 Conversion Rate Optimization means strategically optimizing all the steps required to get targeted conversions on your website or app (purchase, forms, signup, etc.).

The following concepts are those that we need to know so that the conversion optimization and our service could be understandable.

What is a Conversion?

What is the Thank You, Page?

A thank you page is a page that is shown to a user thanking them and indicating that the transaction has been completed after a transaction that is expected to be completed such as filling in a form, viewing a contact page, being a member of a web site, completing a purchase (shopping) by a user on a web site.

What is the Conversion Pixel?

The following metrics are frequently used for conversion optimization: Cost per Action, CPA, Return of Investment, ROI, and Conversion Rate.

What is the Cost per Action?

The metric the Cost per Action or the CPA is calculated by means of dividing the digital marketing cost by the number of conversions. Let’s say that you have spent an amount of TL 100 and, you have attained 20 members in total. In this case, the cost per action is calculated with the following formula 100 / 20 = TL 5.

What is the Conversion Rate?

The metric the Conversion Rate or the CR or the CVR is calculated by dividing the number of conversions by the number of clicks. Let’s say that you have spent an amount of TL 100 and, you have attained 1000 clicks resulting in 20 members. In this case, it is calculated as 20 / 1000 = 2% with the formula of  “conversion/clicks”.

What is the Return of Investment?

The metric the Return of Investment or the ROI is calculated by dividing the money earned by the money spent in connection with the respective marketing activity. Let’s say that as an e-commerce company, you have spent an amount of TL 100 and attained an amount of TL 2,500 as turnover. In this case, the metric the Return of Investment is calculated as 2500/100=2500% using the income / expense formula.

How to Do a Conversion Optimization?

Digital Marketing Optimization by Cost per Action: The optimization by the Cost per Action (CPA) is based on the principle that this figure is deducted for all the digital marketing activities. This enables you to get more conversions by reducing your cost per action. For example, the purpose of a bank is to sell loans and, it wishes to increase the number of forms filled in. Therefore, the budget for the cost per click for the ad target with the lowest cost of action out of the 3 different add targets for which an amount of TL 100 is spent, and thus more clicks are attained and, the optimization is achieved accordingly.

If you think that the Conversion Rate Optimization – CRO service is to meet your requirements, please feel free to contact us and let’s decide together what we can do for you.

We use cookies to ensure that we give you the best experience on our website. If you continue to use this site we will assume that you are happy with it.

This website uses cookies to improve your experience while you navigate through the website. Out of these cookies, the cookies that are categorized as necessary are stored on your browser as they are essential for the working of basic functionalities of the website. We also use third-party cookies that help us analyze and understand how you use this website. These cookies will be stored in your browser only with your consent. You also have the option to opt-out of these cookies. But opting out of some of these cookies may have an effect on your browsing experience.
Necessary Always Enabled
Necessary cookies are absolutely essential for the website to function properly. This category only includes cookies that ensures basic functionalities and security features of the website. These cookies do not store any personal information.
Non-necessary
Any cookies that may not be particularly necessary for the website to function and is used specifically to collect user personal data via analytics, ads, other embedded contents are termed as non-necessary cookies. It is mandatory to procure user consent prior to running these cookies on your website.
SAVE & ACCEPT